Get fresh music recommendations delivered to your inbox every Friday.
We've updated our Terms of Use. You can review the changes here.

The Writing of 'Tipperary'

from The Men Who Marched Away: Songs of the Great War by GreenMatthews 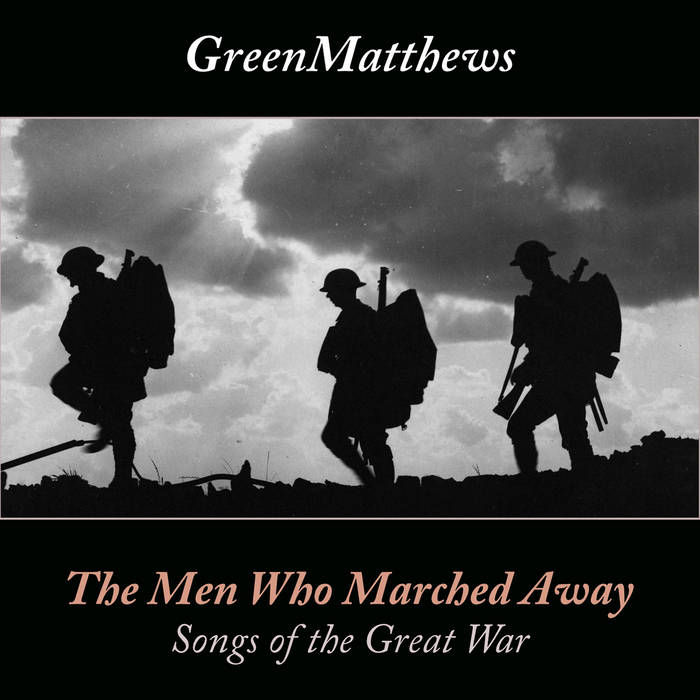 Music and lyrics by Bill Caddick

King Edward the Seventh, who some called The Peace Maker, died back in nineteen-and-ten,
He was buried at Windsor and in the procession rode the noblest and highest of men,
There were nine crowned kings and thirty proud princes, leaders of many's the land,
And old 'Kaiser Bill' rode next to King George, with his Field Marshall's baton in hand,
Crippen was caught that very same year, Haley's Comet flashed by,
And the first of the labour exchanges was opened, the year the old king died.

The Sidney Street siege brought in nineteen-eleven, when anarchy died in the flames,
In London, in June, King George and his queen played the coronation game,
"A place in the sun ", said The Kaiser in Hamburg, launching his new battleships,
King George made India, Ireland and Wales, places for right royal trips,
Titanic was launched on the day of The Derby, London's last horse bus was shelved,
The suffragettes marched demanding their rights, then in came nineteen twelve.

Jack Judge went down to West Bromwich town, to welcome a brand new year,
He went to a pub, to have a little sup, 'cause he liked his pint of beer,
When he'd had a drink he started to sing and he raised his voice on high,
My name's Jack Judge, I'll write you a song, from Oldbury town come I.

Now a Birmingham man was standing near and he heard what Jack did say,
"A pound to a penny", he says to Jack, "you can't write a song in a day",
Jack just laughed, sang another song and he says: "I'll take you on,
This afternoon I'll write you a song and I'll sing it 'fore the day is done".

Jack had another laugh, sang another song, drank another pint of beer,
Then he caught a train to Stalybridge where that night he was due to appear,
And the very first day of nineteen-twelve old Jack Judge won his bet,
And the song he made and he sang that day we never will forget.

In March nineteen-twelve brave Scott and his comrades died while the snow storm roared,
And later that year the good General Booth, finally laid down his sword,
There were riots in Ireland concerning home rule, Mrs. Pankhurst was in prison again,
And Wilbur Wright died, that first among fliers, as the Royal Flying Corps was named,
Titanic went down in the spring of that year, taking fifteen hundred lives,
And the Balkan states blazed from border to border, as death began sharpening his knives.

Of the nineteen-ten monarchs who mourned for King Edward, in nineteen-thirteen few
survived. Though some of them lived to a peaceful old age, assassins took many's the life,
Death came calmly to China and Sweden, but elsewhere the murderer's hand,
Struck The Pasha of Turkey, The King of the Greeks, while Spain survived death's plan.
The armies of Europe paraded and postured, the stock-pile of weapons increased,
At the Hague, as if in grim desperation, they opened The Palace of Peace.

In nineteen-fourteen, with more suffragettes marching, an Austrian archduke was slain,
In less than two months all Europe was marching and death was in business again,
Many's the young man, from many's the family, willingly gave his all,
They died in their millions for dubious victory, answering Kitchener's call.
But as they marched off to the trains and the troop ships, they sang as they hurried along,
And the words echoed back from the graveyards of Flanders, singing old Jack Judge's song...

from The Men Who Marched Away: Songs of the Great War, released September 15, 2014
Sophie Matthews - voice

Chris Green and Sophie Matthews play English traditional songs and tunes in a thoroughly 21st-century kick-ass style. Using a blend of ancient instruments such as cittern, English bagpipes and shawm as well as modern folk instruments such as guitar, flute and piano accordion, they breathe new life into material from hundreds of years ago, making it fresh and relevant for a modern audience. ... more

Bandcamp Daily  your guide to the world of Bandcamp

Semiratruth joins the show to discuss their latest release, "loading..".